The Healing aspect of Taiji is the Qi Gong that is within the forms. The highest level in Tai Chi is using it to Heal as a form of Qi Gong. Through the Qi Gong in Tai Chi forms one can stay young, keep the bones strong, joints lubricated and tendons flexible.

It is very important that Tai Chi must be taught as a Qi Gong. The Tai Chi form itself when done properly is Qi Gong! This was highly emphasized by GM Cheng Jin Cai. A good Taiji master will help you understand this. Qi Gong are exercises that help move Qi in the body by coordinating movements with breathing. The early, beginner Tai Chi forms focus on this concept.

In the advanced stage of Qi Gong, Qi can be manipulated through respiration alone as long as the practitioner knows how and where to channel the Qi.  There are many levels of Qi Gong.  Some of the legendary Advanced Qi Gong are Skin Breathing, Bone Marrow Washing (Xi Sui Qi Gong,) Muscle/Tendon Changing Exercises (Yi Jin Jing.)  The most advance stage is to use it to heal the body, strengthen the body and stay healthy. A true master of Qi Gong look like they barely age. A true master of the highest level of Tai Chi adopts this concept as well AND…. are very agile and strong.

The reason why Tai Chi is so appreciated throughout the world is because in the early stage, Tai Chi is a form of Qi Gong.  Meaning ONE of the objective of Tai Chi’s form is to move the Qi in the body for health and conditioning the body. Then it progresses into deeper more advanced training for Qi Gong as well as martial arts. Within Tai Chi form there is also Qi Gong including Yi Jin Jing & Xi Sui Qi Gong. This is a lost knowledge in Tai Chi. Maybe only a handful of masters still know this….if they have reached the advanced levels of Tai Chi.

It takes 20+ years to get to this level of understanding how Qi is used in Tai Chi for health. Even sadly, this knowledge is slowly dying. The only person I know that reached this level is GM Cheng Jin Cai. Unfortunately this was not passed down to all his students, including his early disciples. GM Cheng Jin Cai was very reserved in his teaching.

More so, studying Qi Gong can help you condition your body to prevent injuries.

There is an Ancient Chinese proverb: “In order for you to understand Gong Fu, you must learn to heal.”

WARNING:
Having an experienced master is very important in your training in Qi Gong. 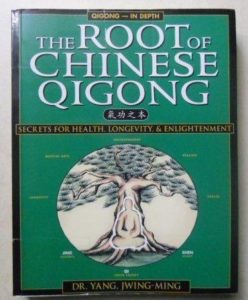 Studying Qi Gong is pretty safe but there are still DANGERS in Qi Gong!  Too much Qi in Spine can over excite the nerves and damage it which can lead to paralyzation as Grandmaster Yang Jwing Ming warned us of the incident with his uncle who trained continuously.  This is also mentioned in his book “The Root of Chinese Qi Gong” p. 82.

Another danger in Qi Gong are visualizations.
Unguided training of opening the channels to the brain more specifically the spine can lead to hallucinations (visualizations.)  Another name for this is Kundalini.  Not only will improper training of Kundalini give you visualization but it can also lead to paralyzation as mentioned by Dr. Yang Jwing Ming.  There is a reason why the Kundalini training is called “Entering the Serpent Spine.”  There are many inexperienced practitioner that make claims about Kundalini training.  Those are the ones that never experienced the real Kundalini effect.

A good master will not only help guide and accelerate your Qi Gong training but can help prevent the dangers in Qi Gong by knowing how to neutralize the dangers.