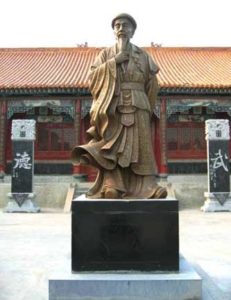 Kung Fu (Gong Fu) or martial art is a way of life in China dating as far back as 3000 B.C. The Chinese have a strong belief in using martial art for health, self defense and spiritualism. Kung Fu helped develop and unite the Chinese culture.

Tai Chi Quan was created by Chen Bu (1372 A.D.) who trained a group of farmers to protect an area of China where the three major rivers merged. The merging of these three rivers served as a strategic military stronghold. Chen Wangting later refined and codified Chen Taiji that also included Qi Gong or the healing side of Tai Chi.  The farmers eventually settled in Chen Jia Gou or Chen Village in Henan Province.

Tai Chi has always been shrouded with mystery and always will be. Chinese martial art masters do not share the inner secrets freely and this is especially true with Chen Taiji. Tai Chi requires continuous practice to understand these secrets that will gradually be revealed through progression that most practitioner do NOT ever reach. Especially those that bounce around with different martial arts.  Tai Chi is one of those roads you take that never ends…… once you find a high level master to guide you. 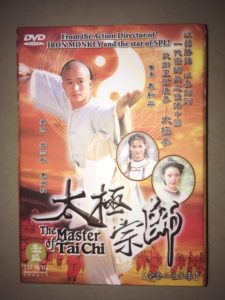 Shaolin monestary was close to Chen Village in the Henan province.

Traditionally Chen Taiji was a closed door system meaning it was only taught to males of the village and never to outsiders of the village.  Only students with the surname of Chen were taught Chen Taiji so they can pass down and preserve Chen Taiji. Chen Taiji was so well kept in Chen Jia Gou that it was only taught orally because of the fear it might fall in the wrong hands. Gradually these rules were broken because of the changing world.

Even within Chen Village to this day there are Subgroups that compete among one another, so teachings and theories will slightly vary between masters from Chen Village. Each subgroup have their own way of training and secrets. This lead to the progression of Chen Taiji but also lead to ill relationships and rival competition.

All other styles of Tai Chi evolve from Chen Tai Chi with the exception of WuDan Tai Chi, which is better left off as another subject.

The first style to

branch out of Chen Tai Chi is Yang Taiji, which is named after Yang LuChan, who was a secret disciple of Chen ChangXing.  According to Grand Master Cheng Jin Cai, Yang LuChan did not learn all the secrets of Chen Taiji because mastering Chen Taiji is a life long journey. Yang LuChan left the village because of his ambition to fight. He was a well known fighter and his fame grew.  Eventually he was asked to teach the Emperor’s royal guard of the Qing Dynasty.  Not daring to reject the emperor, Yang agreed to teach the royal guards.  Fearing the power of the Emperor, Yang LuChan also watered down the Chen Taiji form to be more for health and stripped of the many martial arts aspect and foundation of Chen Taiji.  Thus the branching off of Tai Chi begins……..or the Watering down of Tai Chi.

Today the most popular style is the Yang Taiji form which is a very simplified version of Chen Taiji.  Yang Tai Chi is more available because of the Chinese Communist Red Party created the 24 Yang Tai Chi form for the Wu Shu organization.  Yang Tai Chi is more simple and focuses more on the Yin (softer) side.  There are no abrupt (Yang or hardness) aspect to it.  It is more for health so it is ideal for seniors.

Chen Tai Chi is inclusive to all other styles of Tai Chi as shown on the diagram on the right. In fact, the other variations of Chen Tai Chi like Yang, Wu Hao, Wu Tai Chi are just different levels of Chen Tai Chi that requires several decades to master.  Unfortunately many practitioners do NOT know this because of their ignorance and lack of training.  A TRUE master of Chen Tai Chi can easily explain this and guide you through proper level of training.

Chen Tai Chi even includes many aspect of Bagua too that most masters do NOT know except GM Cheng Jin Cai, who revealed this to his earlier generation of students.  He even made many of us practice the Bagua stepping of Chen Tai Chi.

Sun Tai Chi is a combination of Tai Chi plus Xing Yi. 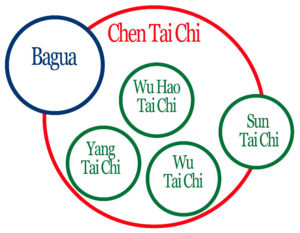 The other major styles of Tai Chi like Yang, Wu, and Wu Hao Tai Chi are just different stages of Chen Tai Chi. In Chen Tai Chi, as you progress with different forms you focus on different theories. Understanding and mastering these different stages take at least 40 years.  To progress correctly in Tai Chi you must follow a chronological order, just like you can’t learn Calculus before learning Algebra

The truth is that there is no need to bounce around with different Tai Chi styles when you have a TRUE Chen Master that has reach a proficient and High-Level of Chen Tai Chi.