Tai Chi theories focuses on foundation on foundations.  Meaning it is multiple layers and requires understanding of a previous foundation before progressing to another. 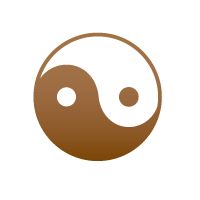 The most basic theory of Taiji is the understanding of the Yin & Yang.  Because of this Tai Chi focuses on dynamic concepts, always adjusting and changing to create balance and harmony.  The Yin Yang theory is reinforced through out training.  Applying this concept means raw force can not be used in Tai Chi.  Using raw force negates this Yin Yang harmony.

No Raw Force
One of the most important concepts of Tai Chi is that Tai Chi is not about raw force.  Many practitioners don’t understand this because they don’t understand how to apply the foundations to make themselves NOT tense. Because they don’t have proper training and knowledge of the foundation, they have tendency to use aggressive raw force in Push-Hands or in application of Taiji.  This is the biggest mistake all Tai Chi practitioners make by forcing a defensive application.

Mastering your footwork is crucial in Tai Chi and ALL forms of Kung Fu.
There is an old Chinese saying that says “Master Your Footwork and You Can Evade Any Opponent.”

5 Footworks
Consist of how to respond when engaging your opponent.  It has multiple purposes, including as a form of Qi Gong with defensive capabilities
A. Advancing forward
B. Retreating backwards
C. Evade Left
D. Evade Right
E. Centering Still

The set itself has many rewards. It helps move the qi in the legs. The 5 footworks when done slowly and properly will help strengthen legs and build coordination.  The 5 footworks precedes the 8 Basic Methods. 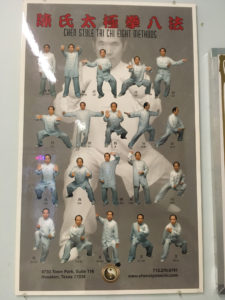 and is done in conjunction with the 1st set (Direct force.)

Qin Na
Qin Na or jointlocks start with a Cai. Qin Na requires understanding of the anatomy of the body and its limitations.  Qin Na is found through out Chen Taiji forms.

Dan Tian
Dan Tian is one of the most important concept of Tai Chi and health.  This is what creates energy and is used for many concepts in Tai Chi.  Without this concept, a Tai Chi user will always be tired and lacking stamina.
It is very often misunderstood as an acupuncture point of Ren 6 but in truth it is a 3-Dimensional concept or a ball that many failed to comprehend.  Grandmaster Yang Jwing Ming made many references to this.

Focal Points
This is where you concentrate energy to move Qi and not be stiff.  The only master that understands this is GM Cheng Jin Cai.

Dong/Kwa
The simplest term for Kwa are the hip joints but it is more complex than this.
Dong is the area of the inner legs that starts from the groin.  These two terms are better defined through training and complement one another.

Ting Jing
Listening Energy. Developing the sensitivity to react & adjust and still be NOT rigid & tense.

Fajing
These are explosive forces that are manifested from any part of the body. A better way of terming this technique is “soft malleable force that can be projected to any size at any distant to reach maximum velocity.”

Silk Reeling energy (Can Si Jing)
This is a coiling effect that mimics that of a silkworm weaving. Commonly defined as Peng with spiral in it.
-not just for coiling
-used for body conditioning
-also relationship between you and an object
-essential in Push-Hands

Alignments
There are many body parts that must align in Tai Chi.  One of the most basic one is the alignment of the head, spine and lower torso.

Taji Fist (Chuan)
Not only used for attacking.
This particular fist is unique. Taiji fist always adjust and changes according to the form and purpose of the movement.

Taji Palm (Zhang)
Many of the palm opening of the hand in Taiji are those similar to Bagua Zhang.
This is the higher level of training that most people will never reach.

INTERDEPENDENCY
Every terms listed above are ALL RELATED and INTERCONNECTED and must be taught to complement one another. A good master will help you comprehend the fundamentals of Tai Chi and their interdependency.